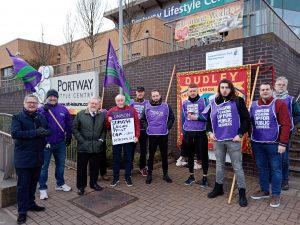 The strike on 28 January at Sandwell Leisure Trust over fire and rehire received widespread support. UNISON members at Portway Lifestyle Centre and Tipton Leisure Centre were on the picket line.

John Spellar – Labour MP for Warley turned up to show his support at Portway. So too did Labour Councillors Bob Piper, Caroline Owen and Bill Gavan. Also showing their support were Dudley TUC and Midlands TUC Regional Secretary Lee Baron, pictured on the far left.

At Tipton Leisure Centre members of Wolverhampton City UNISON brought their banner along with Wolverhampton & Bilston TUC – pictured below. 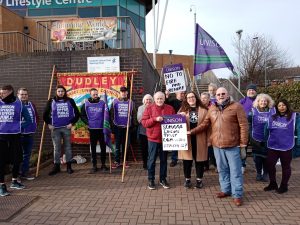 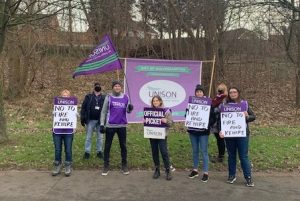 Permanent link to this article: http://www.sandwellunison.co.uk/sandwell-strike-receives-support/