Video for Protest and Strike at Sandwell Leisure Trust

Protest Outside Aquatic Centre Calls Upon Council to Fix the Dispute

Around 40 people joined the UNISON protest rally outside the construction site of the new £73million Aquatic Centre in Sandwell, being built for the 2022 Commonwealth Games.

The protest rally was called to highlight the unnecessary and unjust fire and rehire of all staff undertaken by the organisation set to run the new Aquatic Centre, Sandwell Leisure Trust. Forcing staff to move away from national pay, terms and conditions is totally unjustifiable when a new £73million centre is being built and Sandwell Leisure Trust has £millions in the bank.

UNISON members will be striking again on Friday 25 June and UNISON calls upon the Labour Council to fix this dispute soon. Sandwell Labour controlled Council should not engage organisations that use fire and rehire to run its leisure centres.

Thanks to support from the Labour Councillors that turned up on the protest and other trade unionists, including Lee Baron, Regional Secretary of the Midlands TUC, addressing the protest below.

We have also received messages of support from users of the leisure centres with a Sonia Wilkins sending an email to Sandwell Leisure Trust which included the following:-

“Fire and rehire is an absolute disgrace. I support all those going on strike and won’t be using SLT services until staff are treated with the upmost respect they deserve. I would rather swim in the Tipton canal than use SLT services at the moment.” 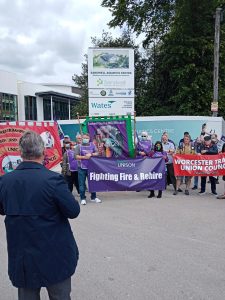 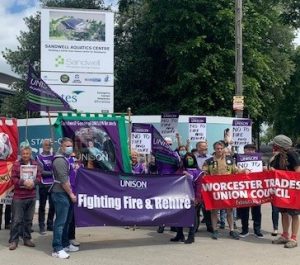 Permanent link to this article: http://www.sandwellunison.co.uk/protest-outside-aquatic-centre-receives-support/