Message of Support for UNISON members at SLT 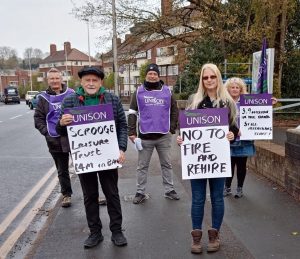 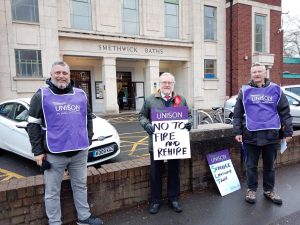 Labour MP John Spellar showed his support of the strike by UNISON members at Sandwell Leisure Trust on 30 April. So too did Cllr Bob Piper and Labour Candidate for Bristnall ward, Ellen Fenton.

Thanks to all our members who took part in the strike action today against being removed from national agreements through fire and rehire. Thanks too for all those that have showed support and sent messages of support, including the Midlands TUC.

Below is a picture from Tipton Leisure Centre that was shut down by the strike. 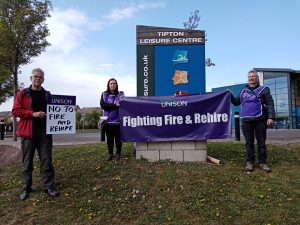 Permanent link to this article: http://www.sandwellunison.co.uk/local-politicians-show-their-support-for-strike-at-sandwell-leisure-trust/

07736 923559 Temporary main number
Email: sandwellunison@btconnect.com Or WMcorona@unison.co.uk for queries to our regional office in relation to the current pandemic.

Due to the ongoing Coronavirus situation, branch officers and caseworkers may be working outside of the main office. Please always try the main office number first. If you cannot get an answer on the office line please try the mobile numbers below – but only in usual office hours.