Sandwell’s Star in Our Schools 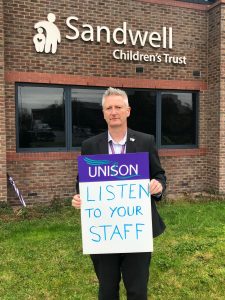 Sandwell UNISON’s survey of members working at Sandwell Children’s Trust shows that morale has deteriorated over the last year. 83% of UNISON members responding to the survey said that they had not seen any positive changes since transferring from the Council to the Trust in April 2018.

Tony Barnsley, Branch Secretary for Sandwell UNISON added, “Whilst protecting the most vulnerable children in the Borough our members are saying, loud and clear, that they are overworked and under-valued. Almost two-thirds said their workload was not manageable, with 89% saying they had worked more than their contracted hours to complete their tasks.

Despite the fresh start promised by Sandwell Children’s Trust, not one of our members said that management had fully implemented their twelve reasons for staff to stay in Sandwell.

The Trust is failing to retain staff and we have been asking management what the new plan is for several months. The amount of agency workers is higher than twelve months ago, with a third of all social workers being agency workers. This not only costs £millions more, it doesn’t help the children of Sandwell keep the same social worker.

Hopefully, the results from the UNISON survey will act as a wake-up call for the Trust to change for the better. If management are going to improve the service, they need to listen to what our members are saying, and not be in denial of how our members feel.”

Permanent link to this article: http://www.sandwellunison.co.uk/unisons-survey-at-sandwell-childrens-trust-highlights-concerns/