Guidance on Improving Ventilation in Schools 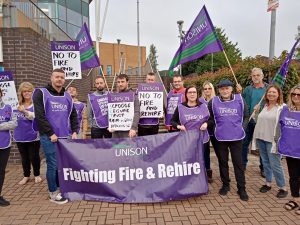 UNISON pickets were out in force at Portway Lifestyle Centre on Monday 23 August. This is the third one-day strike by UNISON members at Sandwell Leisure Trust, after they were fired and rehired to move them away from national pay, terms and conditions.

Car horns were tooted in support and the pickets were joined by four Labour Councillors – who stood in solidarity with UNISON.

After the picket line UNISON leafletted the ward of Deputy Leader and the Cabinet Lead for Leisure, Maria Crompton. Sandwell Council have had 12 months to fix the dispute in the Leisure Centres they own.

How many more months and strikes is it going to take before they fix the dispute?

Does the Council want the embarrassment of strikes by staff during the Commonwealth Games 2022? 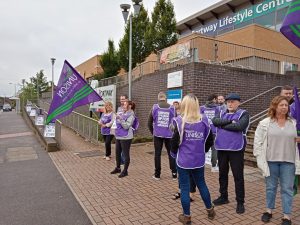 Permanent link to this article: http://www.sandwellunison.co.uk/unison-strike-picket-monday-23-august/