Austerity is Over…Time for a Pay Rise

In clear pre-General Election campaign mode, the Conservative Government has announced the end of austerity and turned the spending taps back on for the public sector, after almost a decade of huge cuts.

This welcome change will be a relief to our struggling NHS, to social care and to our schools that are in financial crisis. Local government is often the last area to be mentioned by Government, yet it is local authorities, particularly Labour Councils, that have faced the biggest cuts.

Pay for council workers has been cut by a staggering 22% in real terms since 2010! That means workers who struggle to keep cut services going, year after year, working harder than ever before, take home a fifth less in the value of their pay. If the Tories have finally found Corbyn’s ‘magic money tree’, then we deserve a pay rise.

•      A national review into the causes of workplace stress and mental health issues in local authorities.

Furthermore, the claim is for this pay rise to be funded by the Government so that there are no cuts in jobs locally to pay for any award. 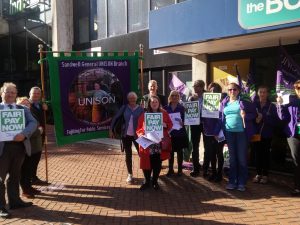 Sandwell UNISON delegates amongst the lobby of our Employers regional meeting that discussed the pay claim.

Permanent link to this article: http://www.sandwellunison.co.uk/austerity-is-over-time-for-a-pay-rise/