Walker Grange set to be Saved

Phased down and out at COP26 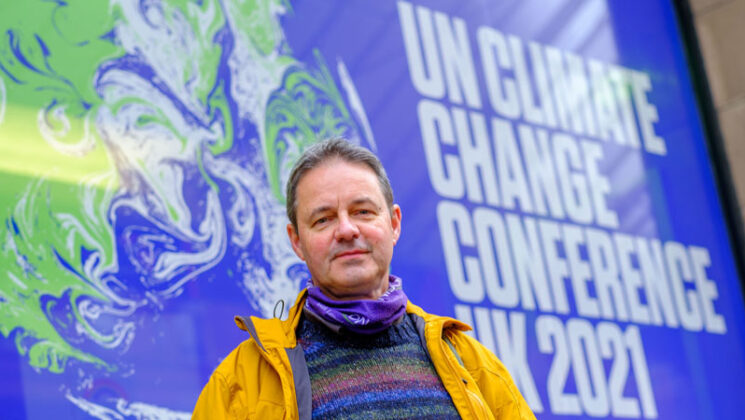 As proceedings ended at COP26 late on Saturday night, the Glasgow Climate Pact joined a long list of previous agreements, arrived at by world leaders, that have failed to ensure global temperatures stop rising.

The sum of all the commitments given before and during the two-week jamboree is that the Earth is heading for a 2.4 degree increase rather than being held back to 1.5 degrees. This, according to the prime minister of Barbados, will be a death sentence for many small island communities.

COP president Alok Sharma claims that the 1.5 target is still alive; but as many people have said, it is on life support and slipping away.

The hopes for COP26 were high. The stakes were even higher. The science is clear – if we do not cut the emission of greenhouse gases such as CO2 and methane by significant amounts by 2030 we will not meet the target of being net zero by 2050 and the planet will overshoot 1.5 by some way.

As an official observer at COP26 with the International Trade Union Confederation (ITUC), I was privileged to spend the second week in the COP26 blue zone, working with a team of trade unionists from across the globe.

The ITUC’s aims were to lobby the government representatives to ensure that the historic commitment in the Paris Agreement to “ensure Just Transitions that promote sustainable development and eradication of poverty, and the creation of decent work and quality jobs” was retained in the final Glasgow agreement. That was achieved.

However, the lobbying of the ITUC, along with other NGOs and many Global South countries, to secure the $100 billion for mitigation and adaptation in the developing countries by 2020, a mechanism for paying for loss and damage for the impact of climate change that is already happening, and a clear intention to reduce emissions, was not successful.

It is true that the Glasgow Climate Pact recognises, for the first time, the need to address the use of fossil fuels, but it does not set any targets, relying on countries to improve on their existing plans to reduce the burning of climate changing fossil fuels. However, in the final hours, even the limited commitment to “phase-out the use of unabated coal” was watered down by an amendment from China and India to change “phase out” to “phase down”.

The inclusion of the word “unabated” was controversial. This gives the green-light to continue to build coal-powered energy capacity, in the hope that ‘carbon capture and storage’ technology is developed sufficiently to be able to extract the CO2 emissions produced by coal. This is a technology that so far does not exist beyond experimental and test sites.

The two Asian countries have been heavily criticised for this – rightly so in my opinion – but it was the EU and USA that effectively gave the green light for this change and whose refusal earlier, to commit to reducing their own commitments to more gas and oil exploration and extraction, meant that lowering emissions was not included in the pact.

Trade unions, climate change campaigners, indigenous peoples, farmers, women and young people lobbying for a better agreement, alongside the island countries and others in the Global South, were essentially begging for crumbs from the rich nations’ tables.

In the end, that is what they got. The crumbs of promises of financing at some time in the future, of discussions on a mechanism for loss and damage, and the hope that 1.5 could be brought off life-support and kept alive at next years COP, or maybe the one after that.

The frustration of the observers was such that they organised their own People’s Plenary on Friday to enable their voices to be heard – voices that had been excluded from many of the proceedings. Moving speeches were given from all of the observer constituencies, spelling out the reality of climate change happening now and spelling out their demands. The plenary was ended with a symbolic walk-out through the conference centre, singing and chanting, to join thousands of protesters outside the high security fences of the COP.

It is obvious that world leaders are not yet sufficiently prepared to take the necessary decisions to cut emissions – and that the movement that was represented by 150,000 people on the streets of Glasgow needs to continue to put pressure on our own politicians to ensure that at next year’s COP, in Egypt, they demand the immediate action required to stop catastrophic climate change.

Permanent link to this article: http://www.sandwellunison.co.uk/unisons-delegate-to-cop26-reports/